My first of 4 nieces turned 2 this past weekend, and I was honored to make her birthday cake.  My grandmother actually made her 1st Birthday cake because she made all our cakes as kids.  I was so excited to help and actually put my cake decorating classes to good use.

This post will definitely be the first of many baking posts.  In case you couldn't tell from my header I love to bake cakes and cupcakes.  I've had many adventures in both and hope to inspire you to whip up something delicious for your next event.

So the party at hand was "Kipper the Dog" themed.  If you don't have kids, or do and haven't heard of Kipper, don't worry.  It's a British TV series that currently airs on PBS Kids Sprout.  I had to do my research for ideas and even my sister-in-law said there is little Kipper themed accessories for parties.  My niece loves Kipper though so we went with it.  I was excited for the challenge.

I spent a lot of time on Pinterest and just googling to find cake ideas.  My sister-in-law asked for cupcakes but a birthday party needs a central cake too.  Take a look at some of the ideas on my Cakes/Cupcakes board.  I was set to do the sheet cake with Kipper's face until someone showed me the Kipper in a basket.  I just KNEW that it would be a show-stopper and I had to use my basket-weave technique.

Let's not wait any longer.  Here is the finished product.
﻿﻿ 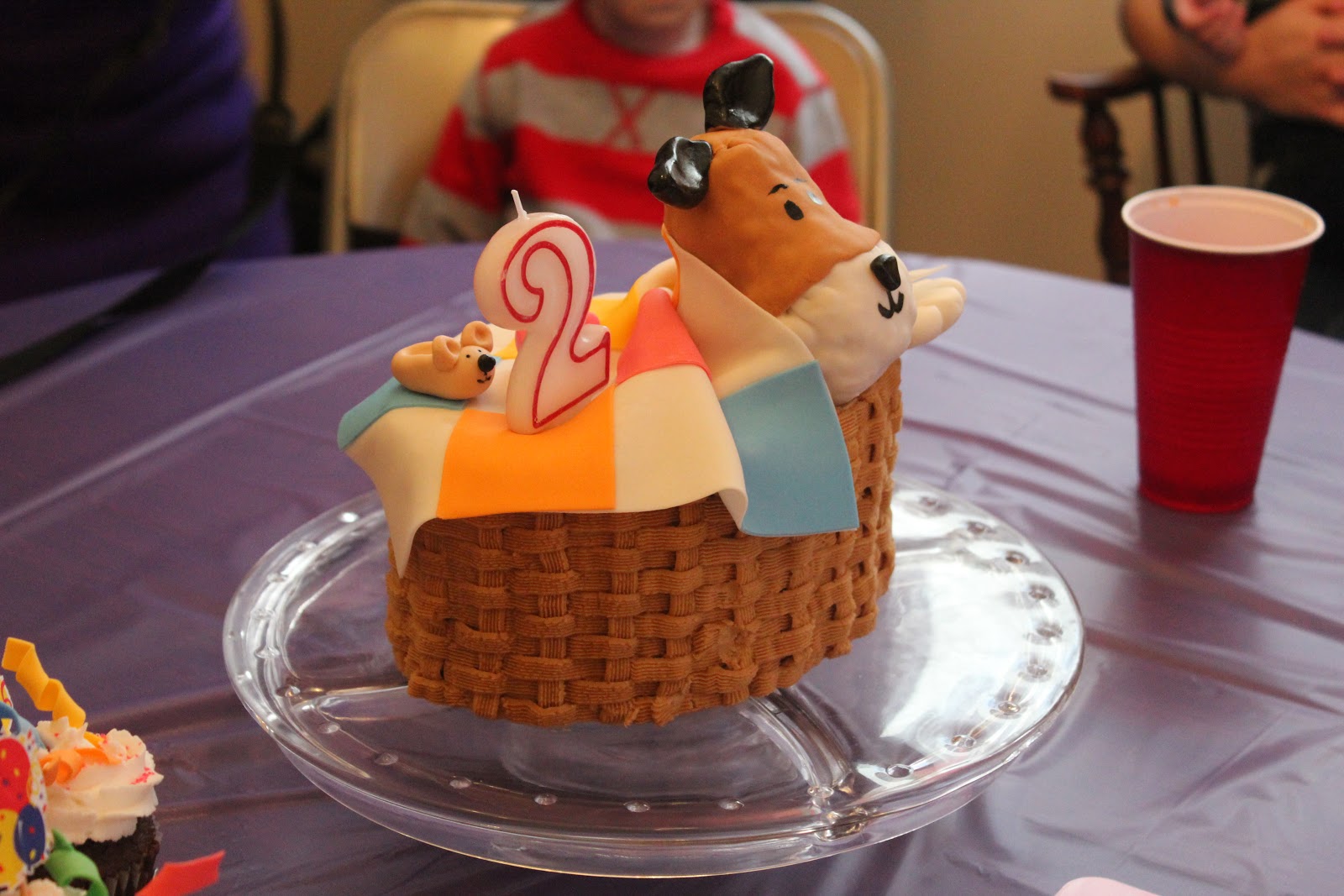 ﻿﻿I LOVE how it turned out.  Everyone at the party thoroughly enjoyed it to.  Best of all my 2 year old niece got wide eyed when she saw her "Kip" cake.  Nothing better than pleasing the birthday girl!

I made Kipper's head out of rice kripsie treat.  Then I wrapped white fondant all around it.  I used pre-packaged fondant from the Wilton line at Michaels.  Next I dyed some white fondant to a color I thought looked close to Kipper's coloring and cut a smooth edge.  Then I wrapped it around the top part.  I made the nose and ears out of fondant as well.  I was able to "glue" them on to the head by wetting the fondant and pressing on.  Just a little trick.  They stayed on well too after I let them have some time to dry in place.  To make those pieces black (since it is REALLY hard to die icing or fondant jet black) I dabbed a wet brush in the black gel coloring.  I then painted the ears and nose and drew on the eyes and mouth.  Easy stuff! 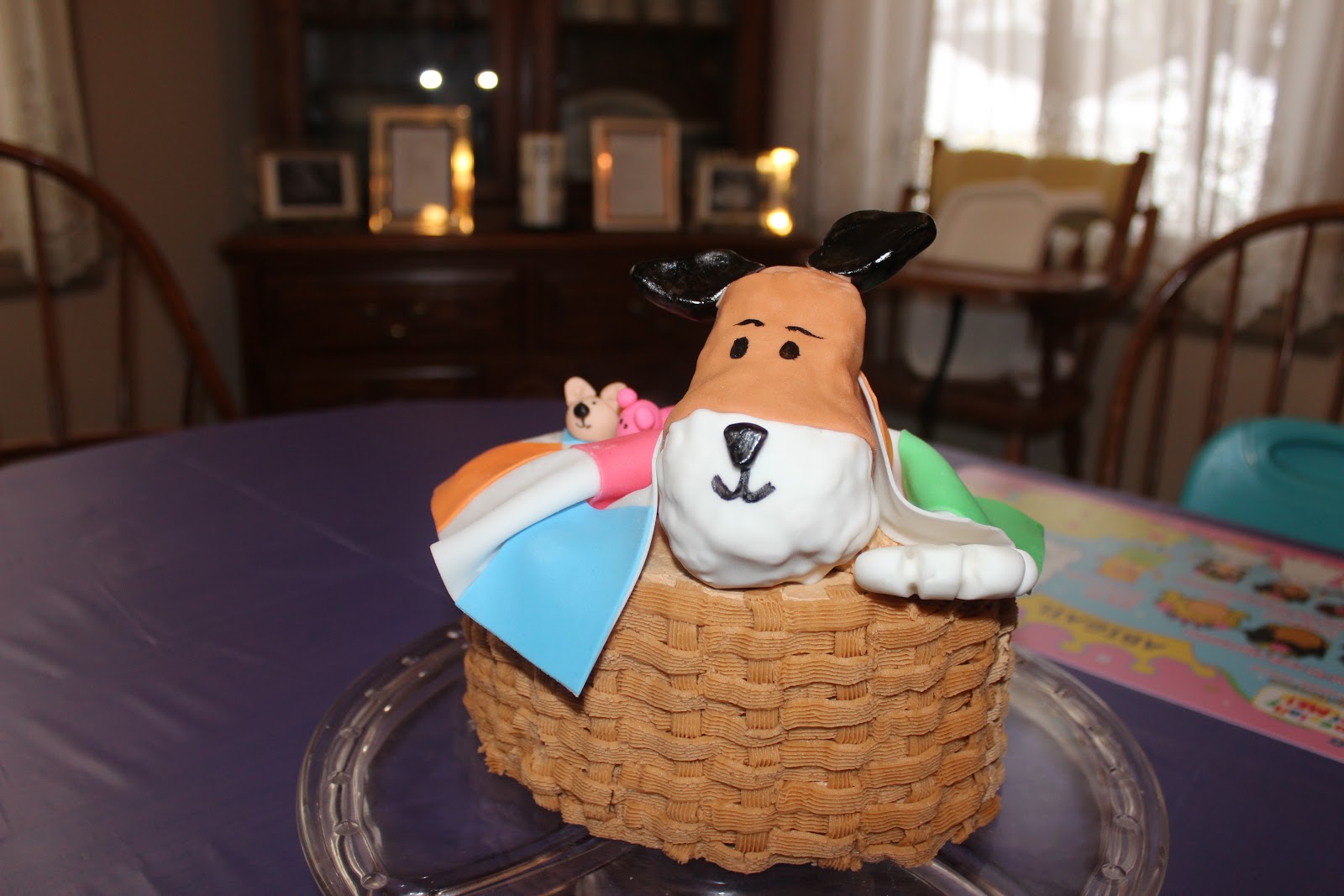 The basket weave was definitely my favorite part.  Most time consuming too.  The weave itself took 35 minutes.  I used buttercream icing.  My hand was so sore from squeezing the icing bag though that I took a lot of breaks.  So I'm going to say about an hour total from start to finish to ice it. 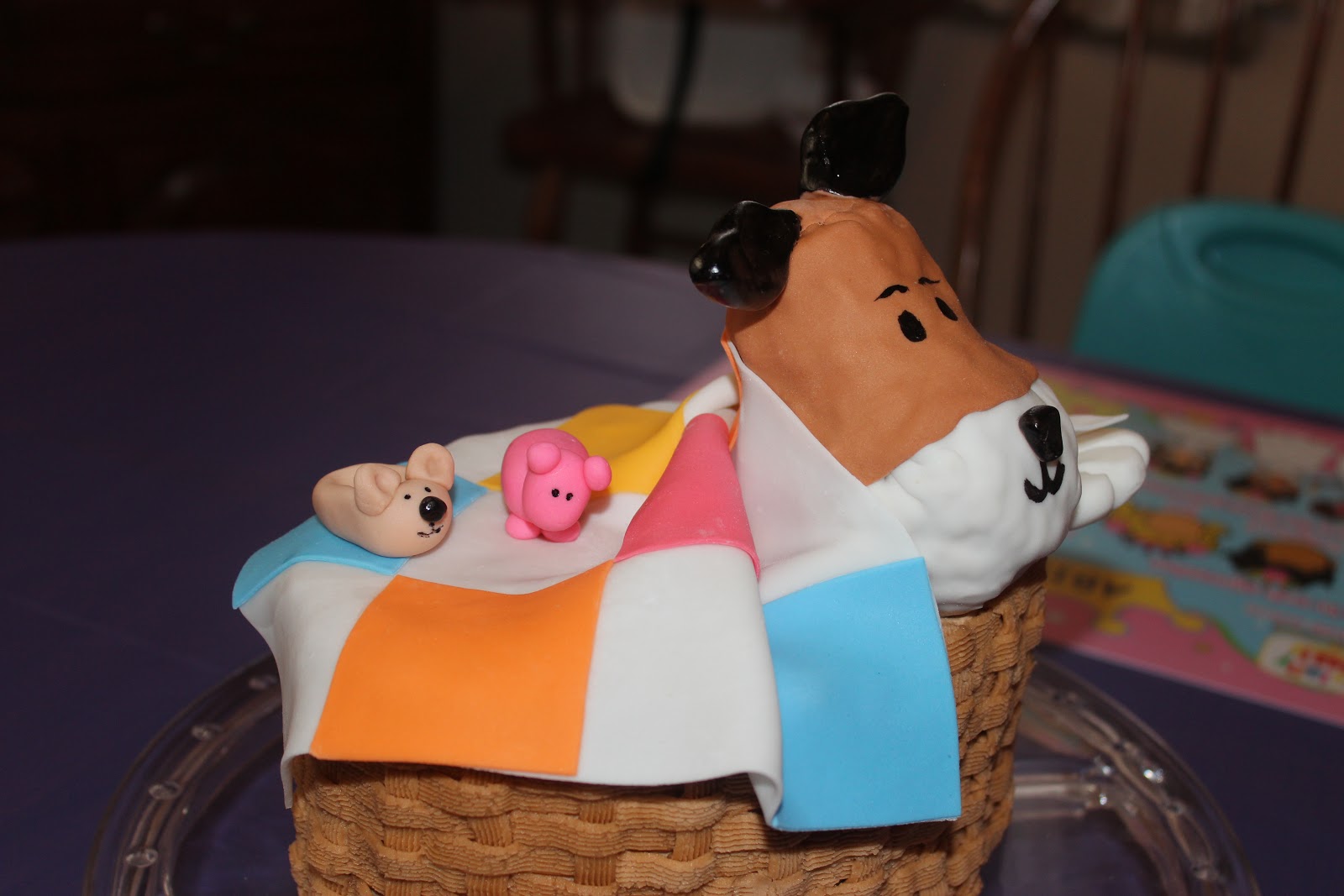 I got a little carried away and decided to add Pig and Slipper to the cake.  They were simply made out of fondant, "glued" together and left to dry.  Each took under 5 minutes. 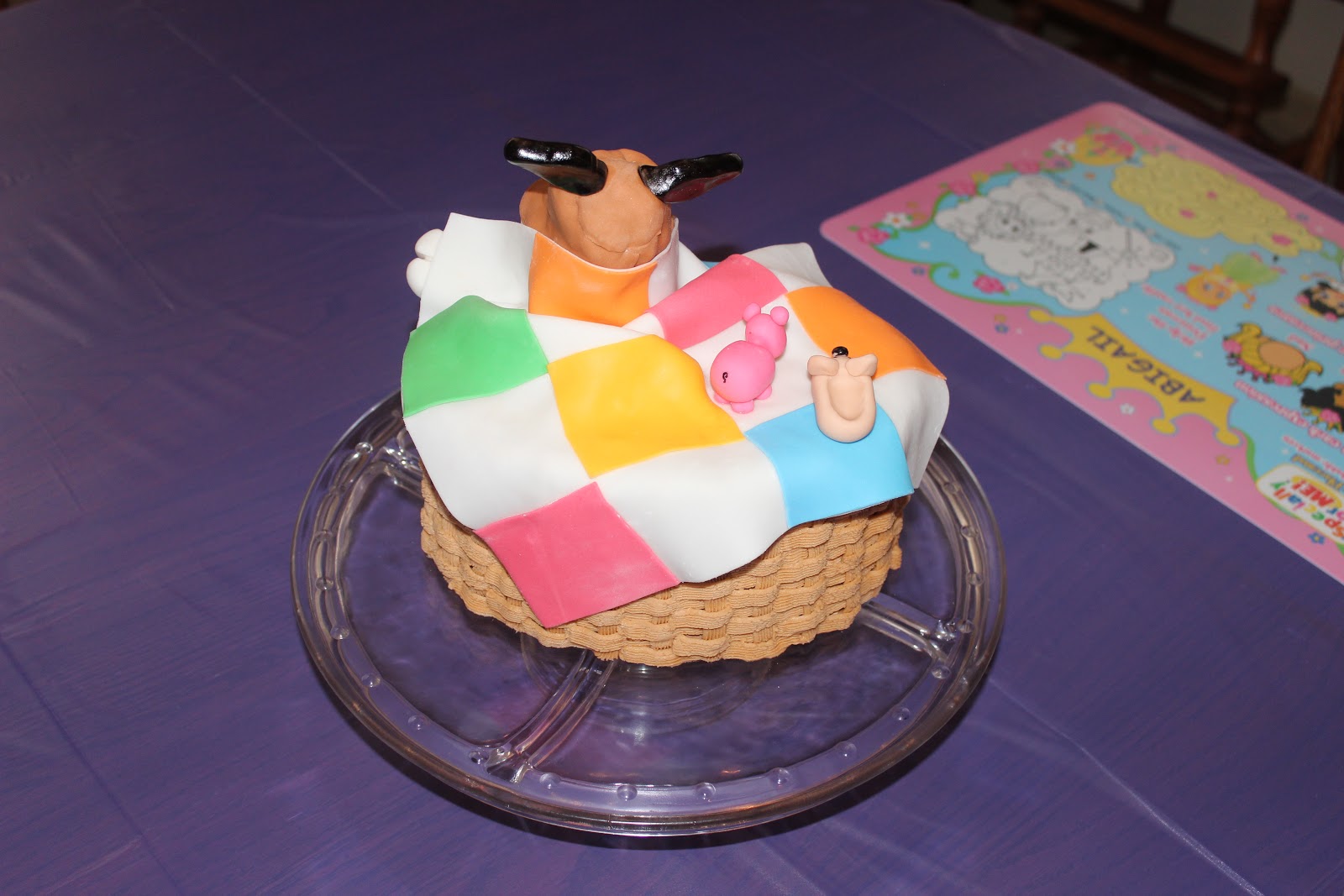 ﻿
﻿I saved the blanket for last.  I made the cake and iced it the night before since I didn't know in advance how long it would take me.  Fondant has to be out in the open (can't even place in a sealed container) or it gets wet and "melty" (not the correct terms).  So the other pieces just sat out in an open container covered lightly with a paper towel.

On the morning of the party I rolled out a large piece of white fondant so I could cut a square that would cover the cake.  Then I cut small colored squares of fondant.  These were left over from the confetti cupcakes (will share in a moment).  I lined everything up and "glued" the square on.

I used toothpicks to secure Kipper's head and paw to the cake.  Then, with my husband's help, we draped the blanket over the cake so it was kind of ruffled up and covered everything nicely.  Pig and slipper were placed on last minute at the party.

We then drove 1.5 hours to PA with the cake on my lap in the car.  My husband did a good job of trying to ruin the cake (pot holes, last second stops, etc) but it all arrived in one piece!  We even stopped for fast food on the way and the lady at the drive through said, "Is that a cake?!"  I wanted to reply, "Nope, it's just a small dog in a basket" but was feeling nice that day.

Along with the cake I made some cupcakes.  We needed to feed about 35 people.  I made both chocolate and vanilla cupcakes, 24 of each.  So we had A LOT more than needed but that's just how it worked out since I used box mixes. 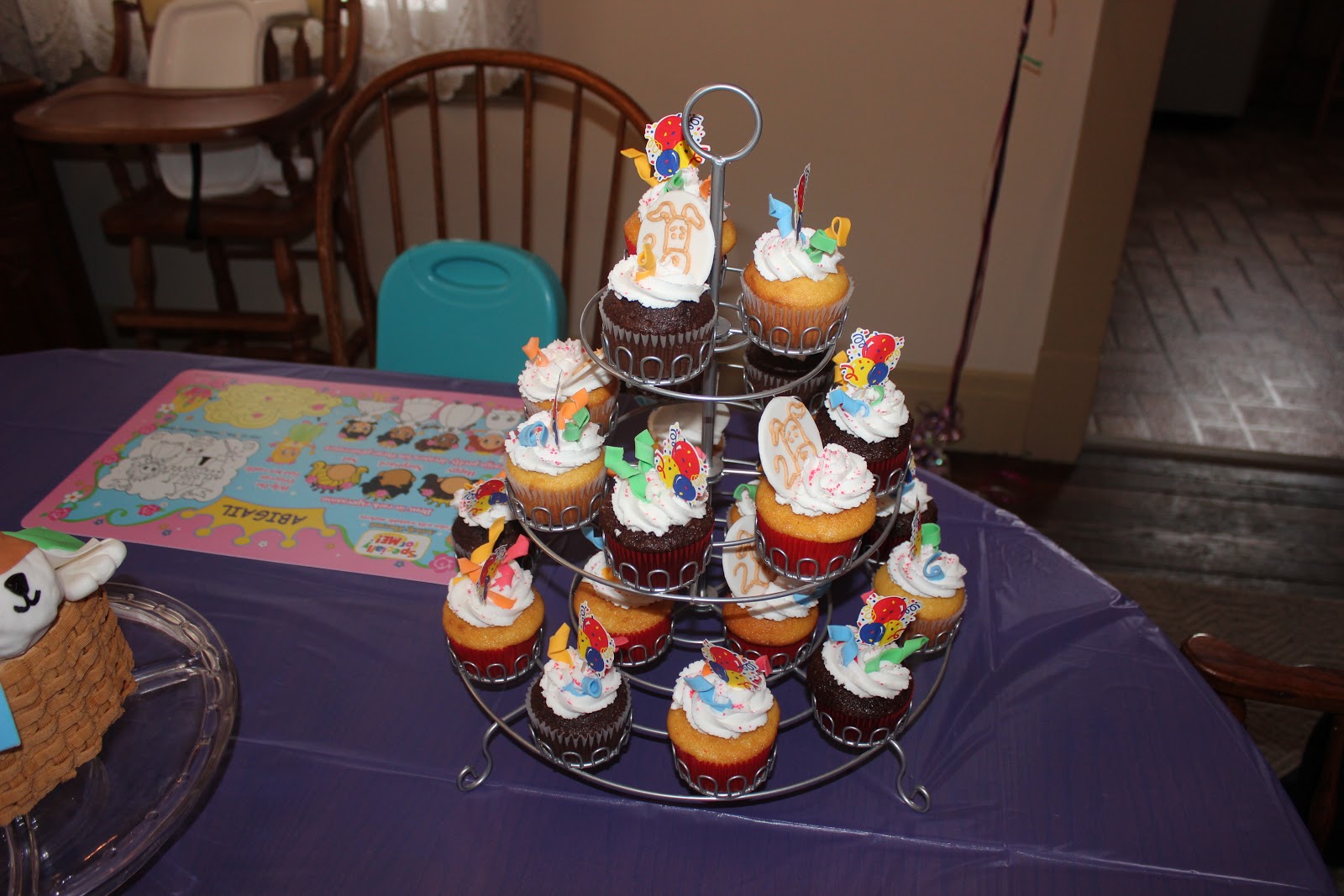 It's a party!  Kipper confetti cupcakes!

When I bought the red cupcake wrappers, they came with the little balloon toothpicks.  They had some confetti on them, so it inspired me to make confetti cupcakes.  I rolled out some fondant that I colored, just primary colors.  I used our noodle cutter to make thin strips.  Then I forced them into spiral shapes and laid them out to dry.  If fondant sits out in the open too long it dries out.  I let these sit for only a day and they held their shape up really well once I put them on the cupcakes at the party. 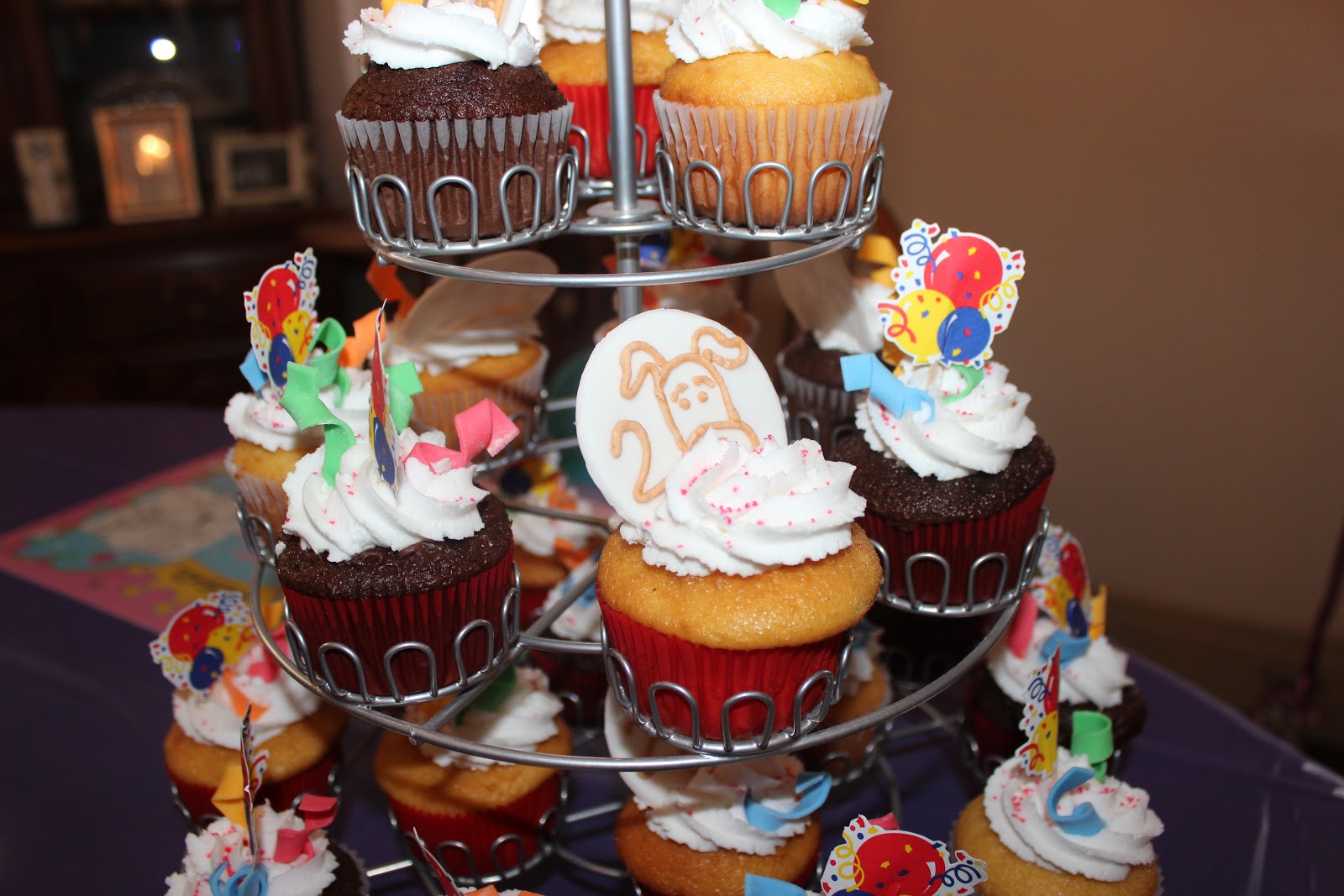 Close up of the cupcakes and Kipper medallions.

I iced the cupcakes and sprinkled red sugar crystals on them Saturday then added all the fancy stuff Sunday at the party.  The little medallions are just a circle of fondant then I used my regular buttercream icing to draw  Kippers face the the "2s".

Are you hungry yet?!  Hope you enjoyed the first of many cupcake posts.

Anyone else a cupcake baker?  I'd love to hear about your baking adventures!