Finally, my cakes were good enough for someone to seek me out and pay me to do a cake.  It started as a bridal shower cake that was going to be plain white with a car that has a just married sign hung on the back with tin cans hanging.  But soon it turned into the wedding cake itself.  Cue the freak out.  This means business

I had one grainy picture from a text message to work from.  The idea was a plain white cake with a tree branch going up it.  Couldn't even distinguish the type of flowers.  The week before the wedding I got the added info that the bride like black and white.  (Note: I wasn't working directly with the bride but someone who was purchasing the cake as a gift).

I searched the Internets high and low for a good tree branch cake example.  And let me tell you, they are few and far between.  Most that I found were on a single layer cake (I had planned for 3 tiers) or they were really chunky.  Not the looks I was going for with my first paid gig.  This had to be spectacular.

During the search I did manage to find some examples of dogwood tree flowers that I really liked.  I at least had a flower idea to move forward with.  Since I didn't have a shape to use to cut these out of fondant, I drew something on a piece of paper then traced it onto the fondant with a sharp knife.  They turned out great once molded and put together.

This cake was scheduled to be picked up Friday night so I started by making the 3 sizes of cake on Thursday evening.  I went with 6", 8", and 10".  My first instinct was  to do 6", 10" and 14" (4" between sizes for 2" around each tier) but when I went to buy the 14" cake pan I realized I could probably feed 100+ people with the cake if I went this direction and I only needed to feed around 50.  The sizes I picked actually turned out perfectly. 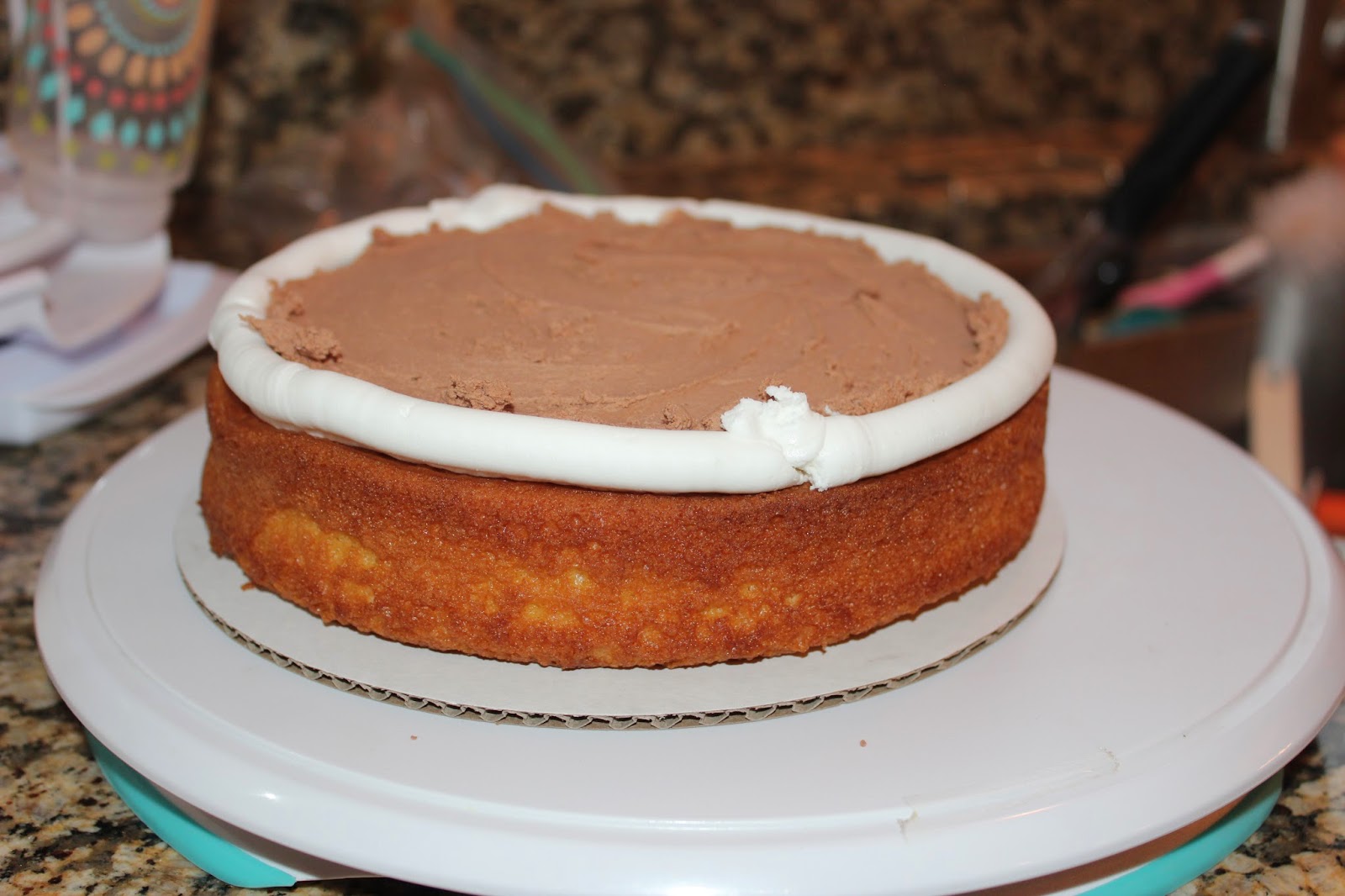 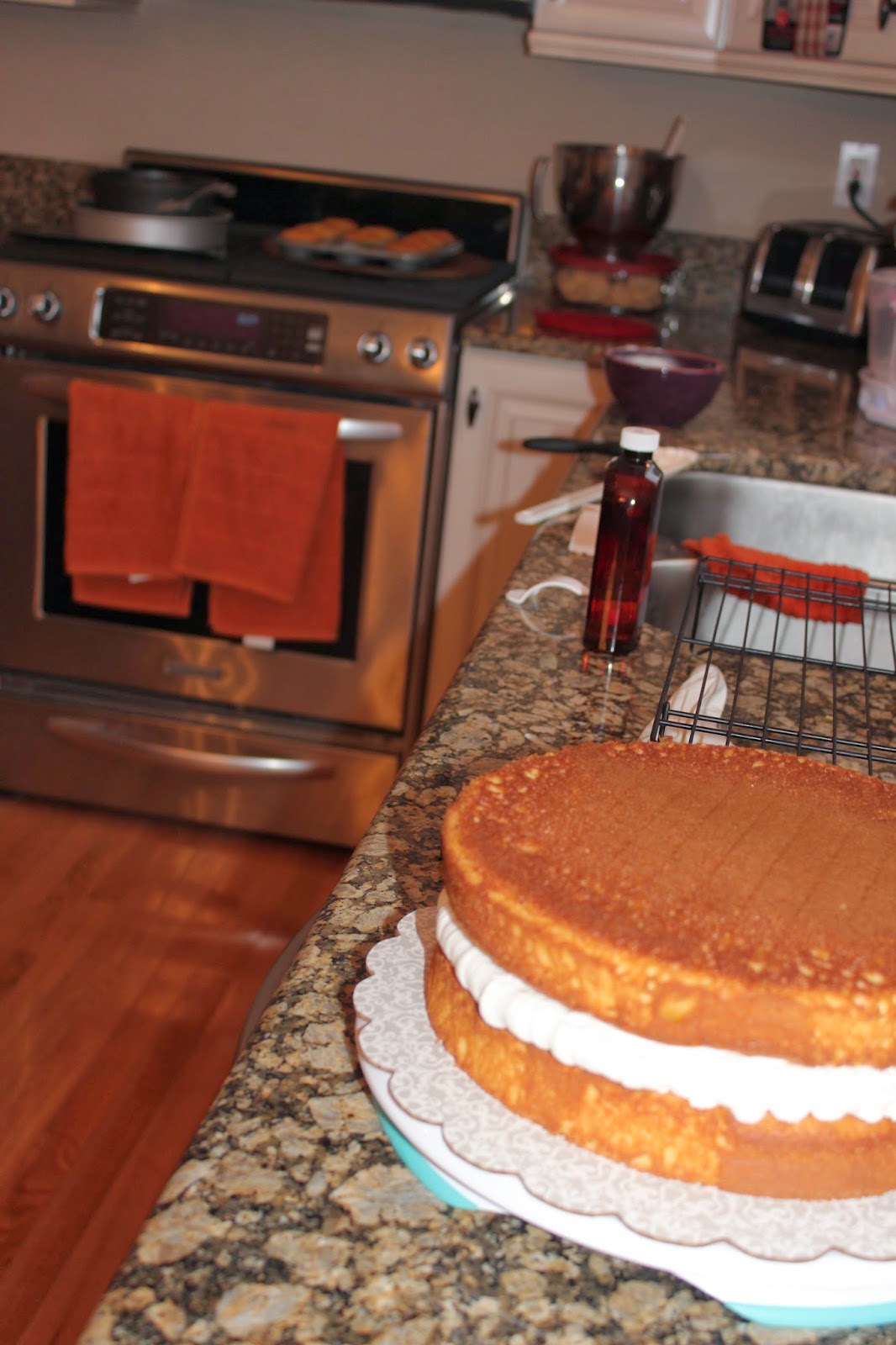 Best tip: flip the top layer of each tier upside down for a smooth/flat surface to work with

Since these cakes had edges straight from the pan (ie: nothing I had to cut exposing the middle which has a lot more crumbs) I was able to do their icing very easily.  I watered down the buttercream enough that it was super smooth yet not running.  I laid in it thick to cover the edges of cardboard each tier would sit on.

The final step to layering the cake included placing dowel rods into each tier that would hold another tier on top.  I just placed them about an inch in from the edge of the tier above and 2 inches apart.  Then I dropped (yes literally held it where I thought it would be centered and dropped it while saying a prayer).  Once the tier is placed there is no moving it.

Once they were stacked I created a border between each tier so they didn't look so rough and made it look like a uniform cake.  Then I made tiny fondant balls and placed them within the border.

Ready for a picture? 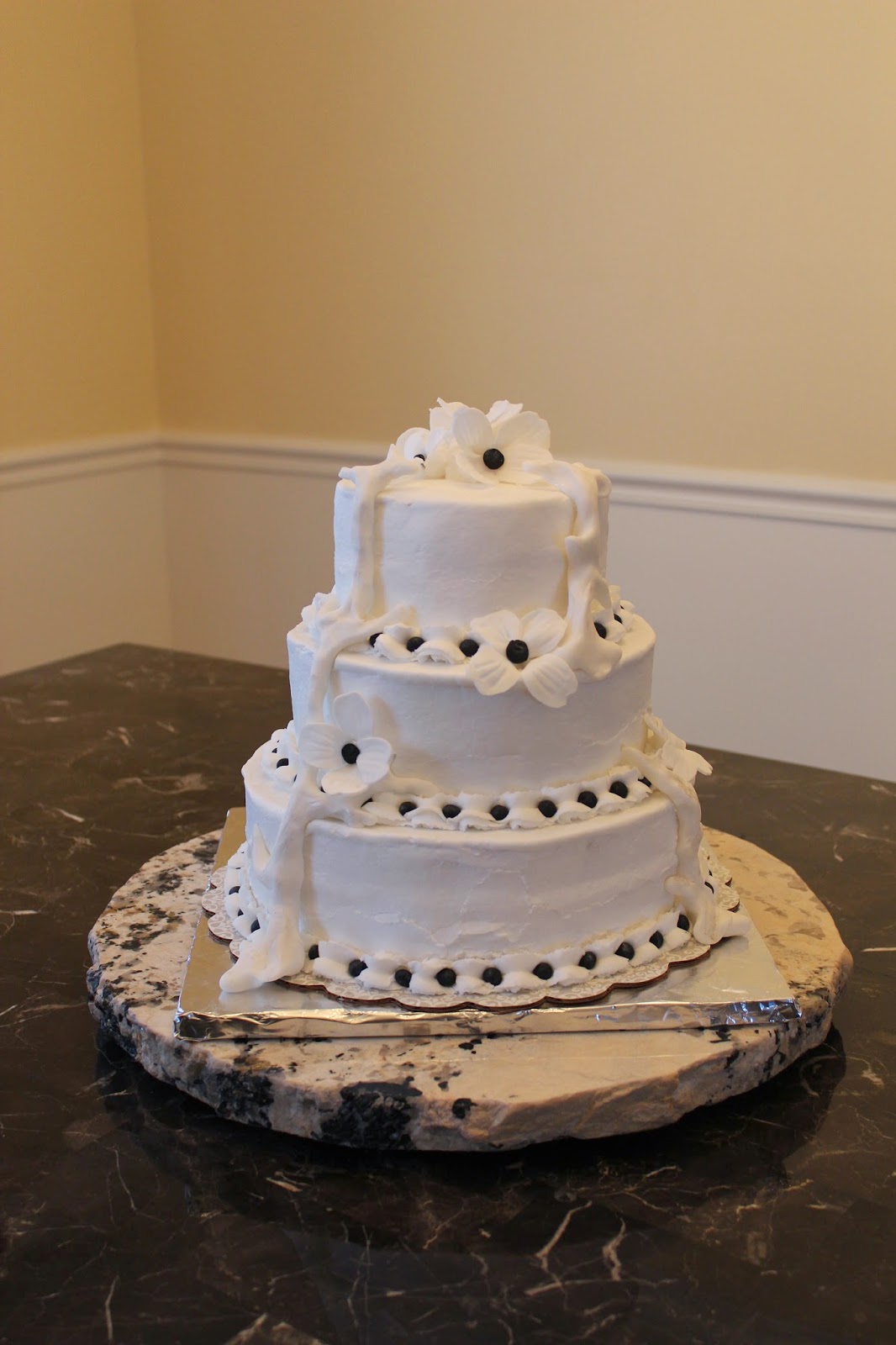 Isn't she a beauty?

Doing the branches that crawled up the cake was a go with the flow procedure.  I just grabbed a handful of fondant and made a thick bottom then I thinned it out as I moved upward.  I knew that adding a limb after the fact wouldn't look good so anywhere I thought a limb would look nice i just squeezed some fondant to the side.  Once I got to a stopped point I ripped off the extra fondant and molded a final small limb.  Then I went back and created all the other limbs.  I had one branch climbing up the entire cake with 2 small branches each spanning 2 tiers on the front then an additional small branch on the back. 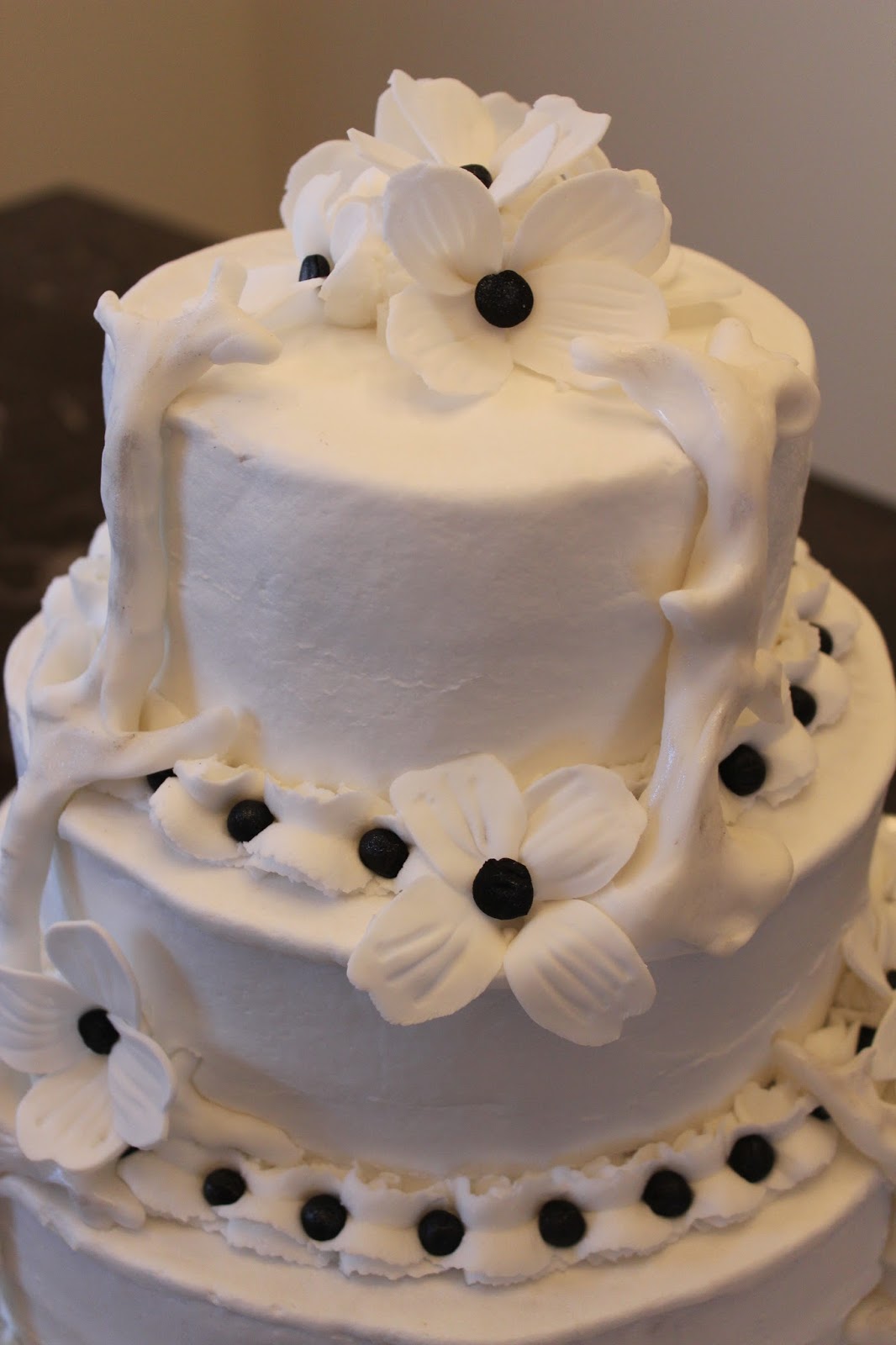 You can see the border a lot better here.

The top of the cake is always the big question for me.  What do I do.  My go to has always been a stack of flowers.  That's how my wedding cake had been done and I've seen it online for cakes so I went with it.  I placed a big blob of icing then laid 4 flowers around it and a flower on the top. 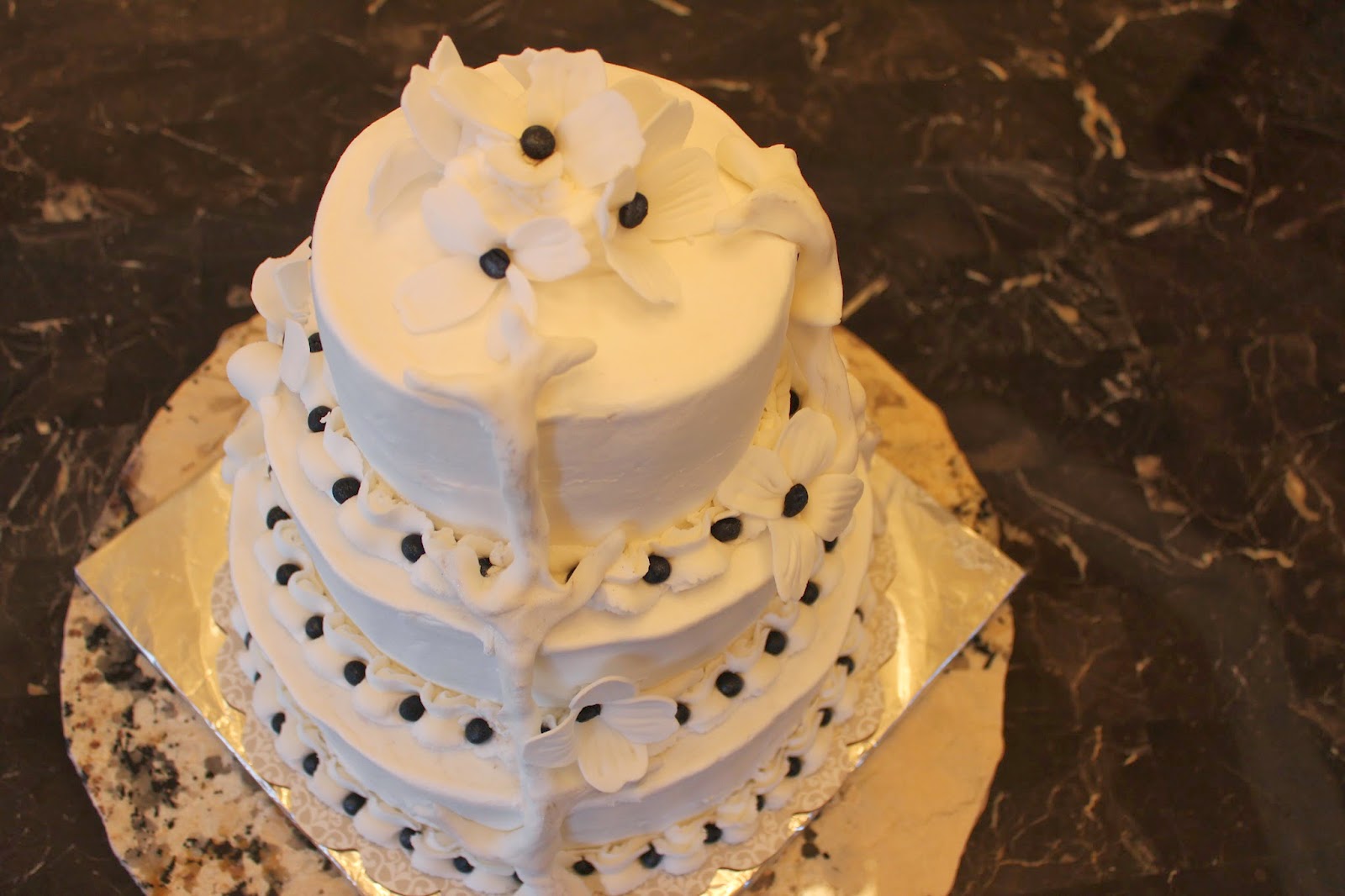 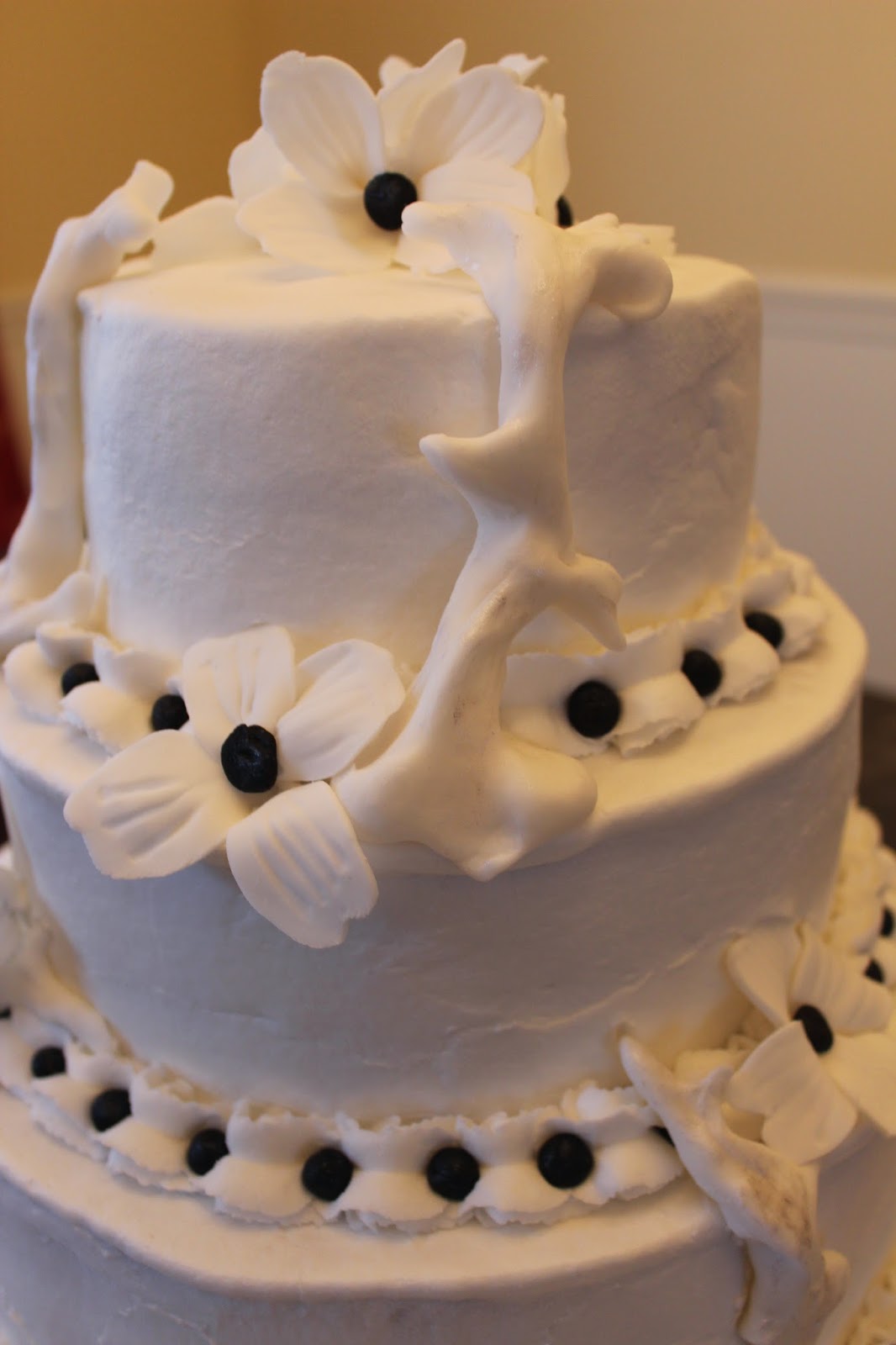 The final step was a light dusting of silver shimmer over the branches, inside of the flowers and border.  I accidentally used a wet brush when I started on the branches and found out a really liked how it gave a textured look to them since I was almost "painting" them.  For everything else I used a dry brush and dusted the powder on.  You can see a bit of the veining in the above photos on the branches.  The shimmer is so light that it doesn't really photograph but in person it is noticeable. 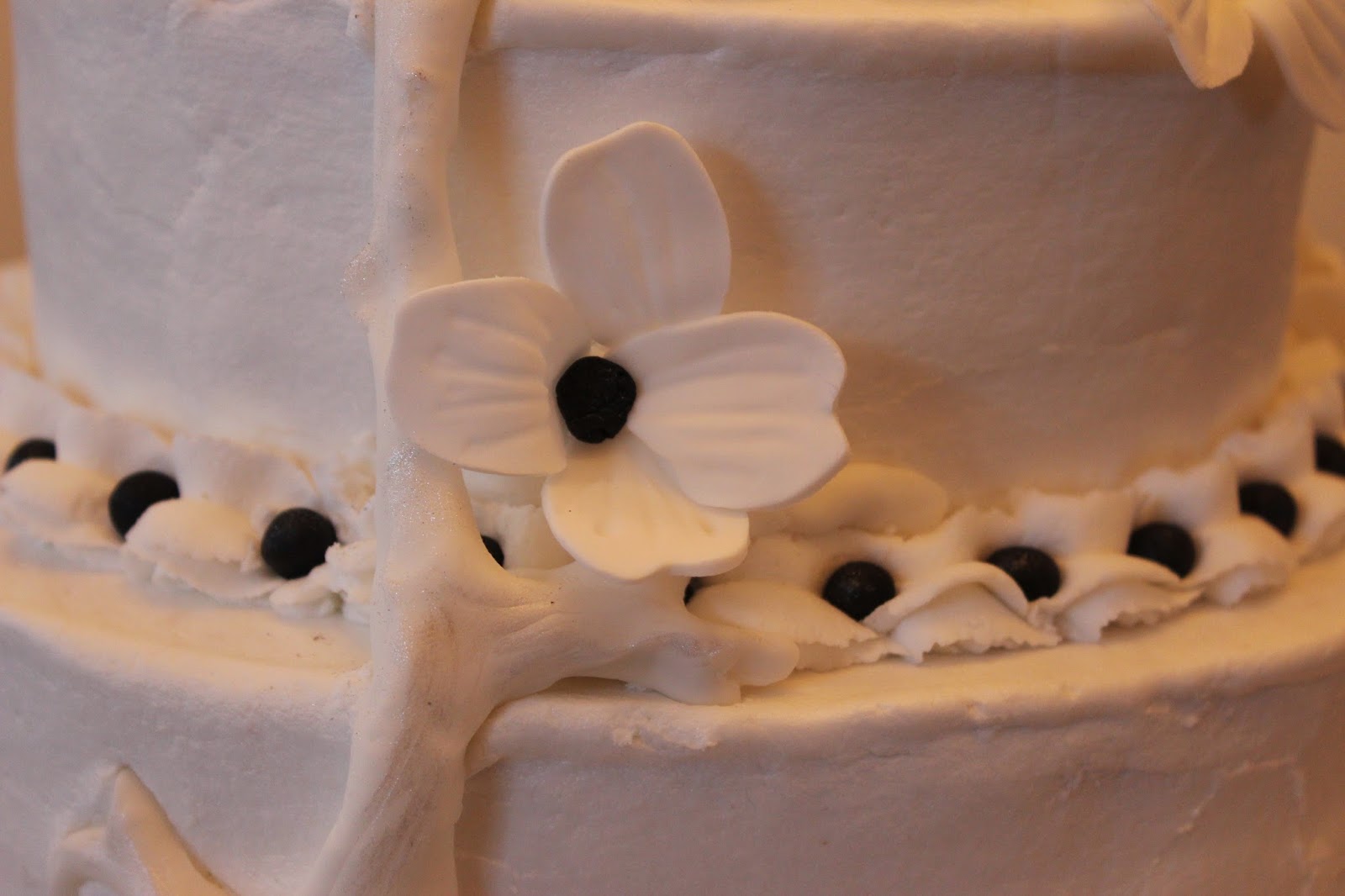 Well now I can take that out of the books.  First wedding cake, DONE!

Have you been to any weddings yet this year?  The Season of Love is soon upon us!